I usually stick to the autoimmune subject in this blog, but today I want to write about something a bit different… Autism. You may wonder why I am choosing this topic to discuss, and I will tell you. I have an autistic son, so autism definitely has an effect on my life, and I would love to share that with you all. First of all, let me start by saying that I do not personally look at Autism as a disability. It is just a different ability. My son, Kurt, is one of the brightest young people that I have ever had the pleasure of knowing, but he does struggle in some areas of his life. 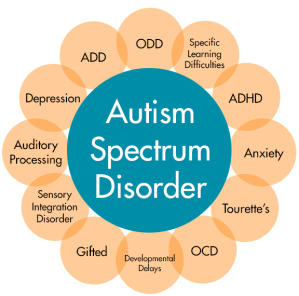 Statistics show that 1 in 59 children in the United States have Autism. Mine is one of them. It can be hereditary and in the case of my son, I believe this to be true. I can currently count at least 5 of his cousins that have been diagnosed with Autism, so I think that it is probably a pretty safe bet. Boys are 4 times as likely to be diagnosed than girls are. I fought for a diagnosis for many years for my son. It was difficult in his case, because he is “high-functioning” and able to communicate, so the schools would all say that he is not autistic. Once I was finally able to get him in to see a psychologist, he was immediately diagnosed.

I did not expect the emotions to come as they did upon finally receiving his diagnosis. I knew that my son was autistic when he was still a baby, but nobody else saw what I did. He was my third child, so I knew what the “normal” milestones were. My son never made eye contact with anyone (not even me). He walked earlier than my other children did, but he didn’t speak until 4. He never let me hold him, or rock him, or cuddle him. As heartbreaking as that was, I knew that it was just par for the course with this disorder. Any loud sounds would cause him to cover his ears and scream “La la la la…” He would repeat words and sounds obsessively. This is called “echolalia“. Once he repeated the name of a street for 8 hours straight on a greyhound bus. I thought that I was going to go crazy hearing it! In hindsight I know that he actually had no ability to control it and it was just one of many symptoms that were screaming at me.

I have watched my son for years struggle with the basics in life, from talking to trying to make friends, to struggling just to greet someone. I have watched him have meltdowns over the smallest things and get bullied just because he won’t speak up. I have fought school after school to put him in the right classes, only to be told that he is not educationally autistic because he can communicate. I have spent more nights worrying about this child’s struggles than I have over my own. I have cried, screamed and prayed for this child more times than I can count, and I will continue to do so until my last breath. I have rejoiced and celebrated the smallest of milestones for and with him, knowing that some of his abilities are diminished compared to his neurotypical peers.

Kurt is my miracle baby.  During the pregnancy with him, I miscarried his twin at 12 weeks of gestation.  The doctor told me to go home and wait for the rest of the miscarriage.  Luckily that doctor was wrong.  For the entire duration of the pregnancy, I was told to prepare myself for the fact that this baby would more than likely be stillborn.  Again, the doctor was wrong and every day I thank God for that.  At 5 months pregnant, I was diagnosed with placenta previa, then I was in preterm labor at 31 weeks.  They were able to stop my labor at that time, but but 3 weeks it happened again.  This time they could not stop it and he was born via c-section at 34 weeks.  He was too healthy for the NICU and we were released from the hospital after only 42 hours!

I have traveled a very long road with this child.  We have been through so many medical and mental crises and yet we persevere every single time.  Some parents act as if raising an autistic child is a burden, but for me it is a blessing that the child that was never supposed to live is still here with me.  Autism has never been burdensome in our family.  As I stated earlier, it is not a disability-it is a different ability.  It is a different view of the same world that we all share and I rejoice every single day that I get to spend with my miracle baby, my Kurt.